The Kelly Report: HHS vs. Jefferson 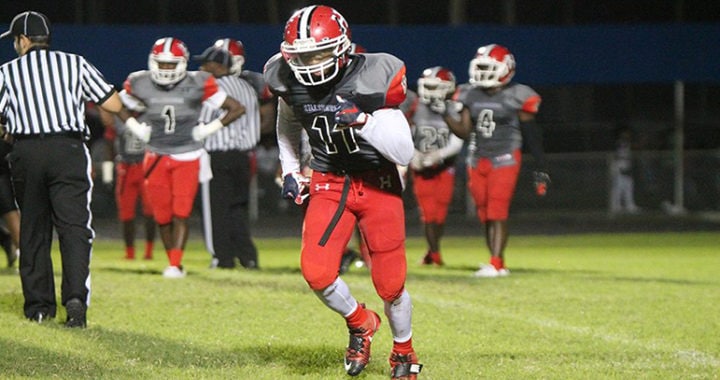 “A win is a win,” as the saying goes, and the Terriers came out victorious when the scoreboard reached zero, but this game had a bit more intrigue than maybe even the players and coaches had envisioned. The opening series of the first half would end up being the only one in which either team would not score that half. Jefferson received the ball on the opening kickoff. The Terrier defense held and forced a three and out. From then until the end of the first half, it would be very easy for a fan in the stands to feel as if they had mistakenly attended a track meet rather than a football game due to the pace at which both teams were scoring.

It almost goes without saying, but winning the field position battle, when it comes to special teams, is arguably the most critical aspect to the job of the specialists who make up this unit. Although the place kicking unit struggled a bit on this night, the punter shined bright. Once again, Senior Punter Brandon Rivera consistently pinned the opposing team deep with long punts, (His 64-yard punt in the 3rd quarter was magnificent) but also did a fine job of keeping the ball away from the speedy Dragon return men. Speaking of return men, it only took one attempt at a deep kickoff to USF commit, Duran Bell Jr. to convince the Dragons to kick away from him the rest of the game as he took his one opportunity and returned the ball over 60 yards; nearly taking it all the way to the house.

If last week’s word of the game for the offense was methodical, you would have to say that this week’s word would quintessentially be defined as “Balanced,” due to the fact that 5 different Terriers scored touchdowns. Also, the total yardage (326-yards) was very close when comparing the rushing yardage (156-yards) versus the passing yardage (174-yards). Senior WR C.J. Williams, again stepped up and kept many drives alive by converting some critical 3rd downs with some good route running and heads up plays. Senior RB/DL Russell Booth, once again showed his toughness by gaining some hard earned yards in the rushing game. He found the end zone and also helped the Terriers offense by scoring on a two-point conversion. The drive of the game may have been one that didn’t even end up in the end zone for a score. With a little over 6 minutes remaining in the 4th quarter, the offense took over and proceeded to go on a 16-play, clock killing drive, and never allowed the quick strike Jefferson offense back on the field.

Terrier faithful in the stands were probably a bit shocked after having seen their defense only give up 14 points in 5+ games prior to this night when they saw the Jefferson Dragons reel off 21 points in the first half alone. However, due to some great halftime adjustments and getting back to the keys in which they had found success in prior games, they came out in the 2nd half and were able to limit the Dragons to only one more touchdown for the game. Because they are so competitive and proud, many of the defensive players and coaches were unhappy with their performance, but this game was a good test against a very competitive team with highly rated players and one which will only serve to make them a better unit going forward. Senior LB Pedro Bostick had a nice game recording 3 tackles and a big sack on heralded Miami commit, QB Cade Weldon.

This week is our last regular season home game. We have a big night planned for the fans and for our opponent. The Senior players and their families will be honored as this is our “Senior Night.” We will also be honoring new members recently inducted into the Hillsborough High School Football Hall of Fame prior to the game. Therefore, why would you even think about missing this game? Come out to the “Dog Pound” at Chelo Huerta field and support your undefeated, 6-0 Terriers as we take on the Yellow Jackets from Blake High School. We look forward to seeing you all on Friday night.