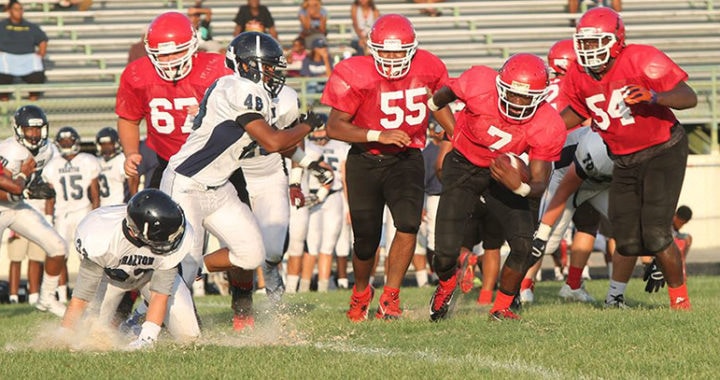 Q: What it means….to be a Terrier

Drequan: “It means a lot to me to be a Hillsborough Terrier, because I had family members that played here. My uncle, Ronnie McCullough is one of the leading rushers in school history. Every time we put on the jersey and wear the big red, we want to be the best that we can be at all times. We didn’t do too good last year, so our goal is to be focused on getting back to that level that’s expected. We just want to ball-out this season. There’s something different about being a Terrier, we are the oldest school in the county, so we have the most history and tradition–Coach G talks to us all the time about that tradition and all of the blood, sweat and tears that have been put into this program throughout the decades before us.”

Q: What’s your most memorable moment so far at HHS?

Drequan: “I have a few. First, every bus ride home after a win. The second is just getting to spend time with my teammates and family–which are pretty much the same thing.

Q: You mentioned the great Ronnie McCullough being your uncle, what about his influence on you thus far?

Drequan: “His influence has meant a lot. I’d have to say he was my hero growing up, because I wanted be like him. Every time I printed something out it was because of Ronnie McCullough doing this–or Ronnie McCullough doing that. When he went to college at Bethune-Cookman, he led the nation in tackles and that just amazed me. So with all of the stuff he’s done with Hillsborough High School, when he talks to me, he gives me guidance and just tells me to stay focused and work to the best of my ability. Knowing all of the stuff that I’m going through, he’s already gone through it so it makes it easy to understand. I mean, what better advice to get –and who to get it from–than from someone like him?”

Q: When did you realize how bad–(not bad meaning bad, but bad meaning GOOD) your Uncle Ronnie was as a player growing up?

Drequan: “I would have to say last year when I moved to Tampa, like, he’s known LITERALLY everywhere we go. From people that knew him at Hillsborough, to USF, to Bethune-Cookman and beyond–he’s got people and connections from the things that he accomplished so many years ago.”

Q: When did you move to Tampa?

Drequan: “I moved down here last summer. I was in Orlando in the Apopka-area, but I didn’t attend school there–I was in Florida Virtual School. Last year was my first year playing football since little league.”

Q: It’s all about team, but what about your personal goals for this season?

Drequan: “My first goal is to become a leader on the team through my work ethic and to help my teammates understand we are in this together. As far as the personal numbers go, I would definitely like to shoot for a 1,000 yards rushing or 1,000 all-purpose yards on offense–and on defense, I want to have at least 50 tackles as well. Our team is so deep this season that our best players don’t have to play both ways–that’s a really good thing because it says we have so many talented athletes on both sides of the ball. If we meet our goals as individuals and as a team, this could be a special year.”

Q: You hold offers from Florida A&M and Buffalo. Do you have plans to play both sides of the ball in college? Or have they been recruiting you on one side specifically?

Drequan: “Both colleges have recruited me for safety. I’m listed as an ATH, because I do play both sides of the ball, but I would definitely prefer to play safety because there’s just something about being on the defensive side of the ball that turns me up.”

Q: An offer from Florida A&M, but no offer from Bethune-Cookman?!? Uncle Ronnie can’t be too happy about the prospects of having that happen, can he? He’s probably wondering why someone located in Daytona Beach isn’t calling, right?

Drequan: “HAHA, yessir! He mentioned something because of course FAMU’s their arch-rival, but he was fine with it. Actually what he said was–because FAMU was my first offer–was ‘great job, that’s the first of many–you came down here for a full year and worked your butt off’—he told me now it’s just time for me to gain more experience and learn everything I can and keep picking up chances to play at the next level.”

Q: Any other schools pique your interest?

Drequan: “I have two others that I’m just working hard and waiting for the opportunity to showcase my abilities at the next level. They’re actually my two top schools even though I don’t have offers from them at the moment. I’ve had some conversations with coaches from both staffs and I already know where I would like to go and those schools are USF and UCF.

Q: What do they offer that make you value them so much, even without an offer?

Drequan: “The football program for sure at USF is an attraction, but with regards to UCF—I’ve been to that campus a bunch of times after living in Orlando and I’ve just fallen in love with their campus from the athletic facilities to the campus itself. I love Orlando, period. That’s home for me even though I’m originally from Ocala, Florida, which isn’t that far from Orlando. I lived there (Ocala) for fourteen years. I actually still have a lot of friends that play for Vanguard, North Marion and Trinity Catholic High Schools in the Ocala area as well. I am very committed to going to either one, whichever school that I can land on the defensive side of the ball, first.

Q: Favorite class? Plans to major in college would be?

Drequan: “My favorite class is definitely English. Math used to be my favorite subject until Algebra, but I like to read and if a subject can capture my attention I’ll spend all-day reading. Also, anything that has to do with writing I enjoy. I could just write all-day long. My favorite things to write are essays and I learned that I loved to write after the fourth grade to be honest. We had writing prompts for FCAT and I wasn’t too sure how I would do on them, and then I ended up getting the second highest score in my class so that’s when I figured out this would be something I’d be good at. As far as college, I would love to major in Sports Broadcasting–which still has quite a bit of writing and research involved with it.”

Drequan: “He’s a very disciplined man. I’ve learned discipline from him and he prepares you (especially, football-wise) to succeed at the next level because of the schemes we run at Hillsborough. Most importantly, I’ve learned he truly wants the best for us.”