The Kelly Report – HHS vs Durant 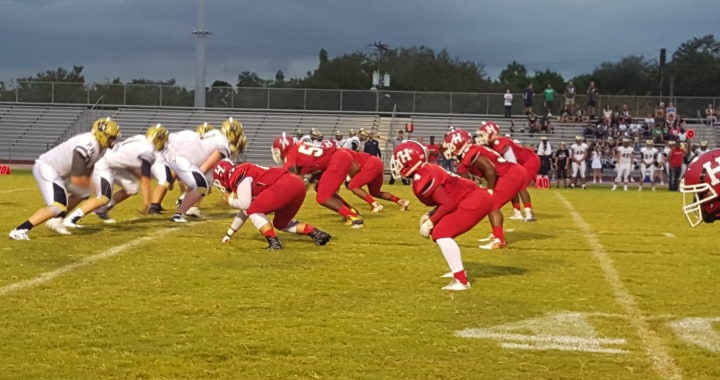 This week’s game pitted two teams coming off impressive wins in their respective pre-season classic matchups. The contest featured contrasting styles, at least historically and philosophically. Durant has always been a very physical team that seeks to impose its will on the other team. It prefers to keep the ball on the ground and pound its opponent with a very hefty and strong offensive line. The Terriers have been more balanced and have been equally adept at gaining yardage both on the ground and through the air with lighter and sleeker offensive lineman.

Now that you know a bit of background information and if you were not able to attend the game, you will understand how impressive the performance of the Terrier’s Defense was in handling Durant’s running game. The defensive unit was resilient the entire game and came up with big stop after big stop. They limited Durant’s rushing yardage to 24 total yards, and less than 160 yards in total. It took a very impressive drive and one of the most spectacular one handed catches to put the first points of the season on the board against them in what had been 9 consecutive scoreless quarters of football. Once again the defense created turnovers. Robert Sherman III came up with a very athletic and acrobatic interception. Safety, Ivan Amedes, also had an interception late in the game to thwart a last minute drive. Florida Gators fans surely were happy had they been watching this game, as verbally pledged commit, Zach Carter, was virtually unstoppable recording 3 sacks and numerous QB pressures all while being double teamed for most of the night as well as playing offensive line. 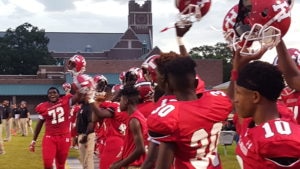 Gator fans were not the only happy alums watching this game as South Florida “Bulls” verbal commit, Duran Bell Jr., wowed the crowd with some electric runs. He finished the night with 2 TD’s and over 160 yards rushing. Probably the most impressive run was a 75-yard scat up the home sideline in which he broke a tackle, spun free, and then dazzled the crowd with his track speed on his way to the end zone.

The turning point in the game came in the 3rd quarter as the defense made 5 stops from within the 10-yard line to keep the Durant offense from scoring. The offense proceeded to take the field; with its back to the wall and starting from its own 1-yard line, and moved 99-yards all the way to pay dirt in the opposite end zone.

If you are new to this area, let me help you out. Hillsborough is the oldest high school in the county and Plant is the 2nd oldest. So, an understatement would be that, the two schools have a bit of a rivalry. Therefore, get here early this week as seats will be hard to come by. Wear as much red colored clothing as you can and bring your red terrier towels as we are having a “Redout,” game. As always, we love seeing you all in the stands and are looking forward to another great game this coming Friday. We’ll see you at Chelo Huerta, “The Dog Pound” on Friday night. GO BIG RED!!