You are here: Home - Blog - Player Features - G3 – The Man Behind The Defense

G3 – The Man Behind The Defense 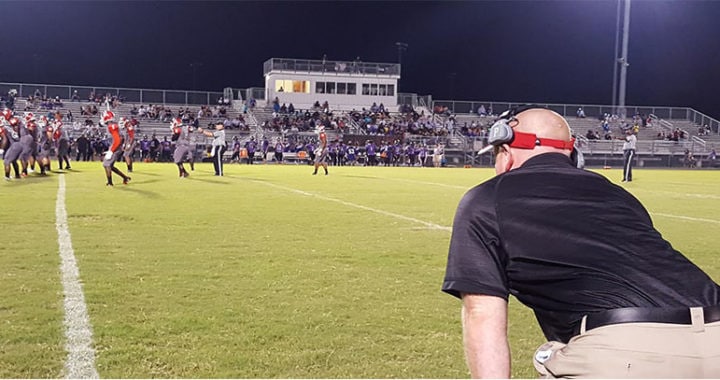 Every great defense has a great guy pulling the strings behind it. That’s no different than what’s going down at Hillsborough High, where the defense has been on fire to begin the 2016 campaign. Behind that is defensive coordinator Earl Garcia III, who’s given the Terrier defense all of the tools it needs to succeed.

Garcia (not to be confused with his father, and Hillsborough Head Coach Earl Garcia Jr.), has been the DC since 2012 – now entering his fifth year with the Terriers. Before that, he graduated from Hillsborough High in 1999, where he played football under his father. He bounced around in his college career before getting his degree at Florida Atlantic. But for the past five years, it’s been all about making a statement that the Hillsborough defense is the best defense in the state.

The Terriers defense has been very successful so far in 2016 with six interceptions and ten sacks. That’s just the special stuff that fans love to see. But the hallmark of this defense is getting to the ball and attacking, according to Garcia. “At Hillsborough, we’ll watch high school film to get better and plan. However, we do have a little different approach. Sometimes, we’ll watch tigers and lions hunting, and we’ll use that as a way to show the guys how to react,” Garcia said.

A little unorthodox, eh? If you watch the Hillsborough film, you see that same intensity.

“We try and bring pressure, intensity, and attitude to the table every single time we play,” Garcia said. “We’ve had our seniors for the past three years, and they’re intense. At the end of the day though, our goal is to make the complex, simple. We want our playmakers to make plays and we just want the kids to be kids.”

Hillsborough currently sits at 3-0, and their defense has only allowed 14 points on the season, seven to Durant and seven to Gaither. They shut out King last Friday, and they’ve got a chance to have a big defensive game against Spoto this Friday. If all goes right, the Terriers could be sitting at 5-0 before they go into a test with Jefferson on October 7th and then Blake on October 14th.

A road game against Brandon may be the only breather before they hit the road to Seffner to take on Armwood on October 28th, their last game of the season (without playoffs). “Bring it on. I don’t care if it’s the Green Bay Packers. Bring it on,” Garcia said.

That’s the attitude that the Terriers have developed over the past few years. They’ve been good, they’ve been very good, they’ve been very fast, and they’ve had the potential to do a lot of great things. It starts with Nigel Harris in 2012 (now terrorizing offenses at USF), it’s continued with Azeez Al-Shaair in 2014, and it’s continued with Zach Carter in 2016. The Florida commit already has racked up 4.5 sacks this season, and he’s looking for more. But what’s been more impressive about Carter in 2016 is his ability to play multiple positions without any complaints.

“We’ve had him at nose guard a little this season, and I really think he had the best game of his high school career against Durant. He’s used that 6’5”, 265 lbs. frame to really do anything we need to in the trenches. He’s given us no pushback, he’s always been open to doing whatever we’ve told him to do. He plays hard, but he’s always loose. He’s not the ‘ra-ra’ kind of player, he’s going to get the job done and he’s going to do it well.” 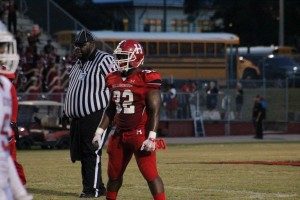 It’s not just Carter. It’s the whole team, the defensive leaders, like Carter, Armand Chalk, and Leon Gatlin. Garcia and his wife gave birth to twins in March, but they were born prematurely. It was the reminders from his defensive leaders like Carter, Chalk, and Gatlin that kept him on track and able to coach the Hillsborough defense to have a great season thus far.

“We’re always telling our guys to stay on the course. In defensive meetings, we talk ten percent football and ninety percent about our lives. While my twins were in the hospital, I never missed a day of work, I would iron my clothes in the hospital, and it was the little reminders of things I said, but now forgot, that got me through those days and nights. Past April, I wouldn’t listen to the doctor’s diagnosis, I would always walk out of the room, because I knew it was going to be okay,” Garcia said. “Earlier in the season, our linebacker coach had a health scare, but the team rallied around him just like they did me.”

One of the special things about this relationship between Garcia and the Terriers is the ability to coach with one of the most winningest coaches in school history, who also happens to be his father. “It’s a neat deal. It has it’s ups and downs, just like every other relationship, and it’s certainly not The Brady Bunch. But at the end of the day, in those 48 minutes, we’ve both got the same color on, and it’s pretty special.”

Special is certainly a word to describe the Hillsborough defense in the way that they play on Friday nights. Whether it be the hard hits of Chalk, the sacks of Carter, or the interceptions of Marterrence Holloway and Gatlin, the Terrier defense has been dangerous, as they will continue to stay on the course for the rest of their 2016 campaign.