The Kelly Report: HHS vs. King 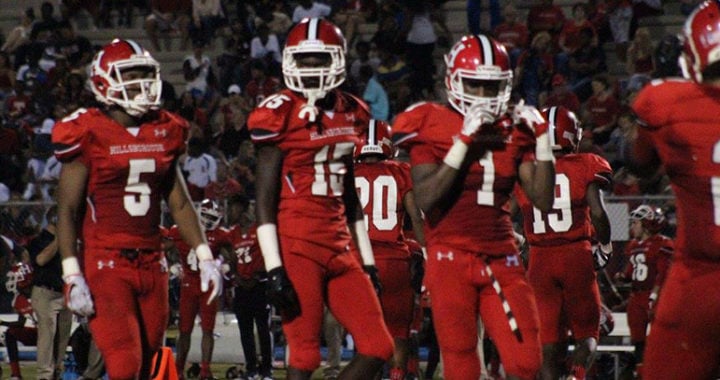 Fill in the blank with a superlative of your choice and it would be appropriate to describe the performance of the Hillsborough Terriers from Friday night’s game in which they dominated in all three phases against the King High School Lions. Hillsborough is not accustomed to losing as it had the previous season to King, and being that this was the 1st district game of this season, the Terriers set out from the beginning to show that last year is long gone and inform future opponents that they intend to reemerge as a force to be reckoned with in the district and beyond.

Defensive minded fans, as well as everyone in attendance, had the privilege of witnessing something never seen before, at least during the Earl Garcia Jr. era, at a Hillsborough High School football game. In baseball terms, it was the equivalent of a pitcher throwing a perfect game. The defense forced a punt or turnover on downs on all 8 possessions that they faced versus King’s offense. The defense lined up for 27 snaps in total and held King to -29 yards of total offense not giving up a single 1st down. Air traffic controllers (DB’s), Marterrence “AJ” Holloway and Leon Gatlin, once again patrolled the sky and snagged an interception apiece. Controlling the ground forces was Zack Carter. Zack had multiple tackles, two of which resulted in 4 points for the Terriers by way of 2 tackles in the end zone for 2 safeties. If you are keeping count, extending back all the way to the spring jamboree game, the defense has only given up 14 points in 18 quarters of play. To say they are stingy and desirous of posting a goose egg on the scoreboard every week is an understatement of monumental proportions. 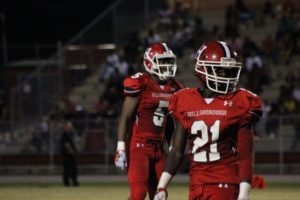 Special Teams played a big role this week as well. Using a bevy of return men, the kick return and punt return units consistently set up the offense with favorable field position. The competition will be fierce at practice this week to see who wins the full time punt returner job. Junior Kicker, Christian Naranjo showed excellent accuracy on his kickoffs, and he had plenty of opportunities due to the amount of touchdowns scored.

Speaking of touchdowns, WR Nate Dantley Jr. had a spectacular one on the opening drive of the 3rd quarter. He made a phenomenal catch on the home sideline. Shaking off the tackle attempt of the CB, he stiff armed the Safety on his way to the end zone for a 68-yard TD reception. SO Tyler Thomas also made an impact. He had over 230 yards combined passing and rushing. SR CJ Williams was the recipient of the other TD pass thrown by Thomas as the WR made a big 4th down catch and raced in for 6 points. The offense had 51 snaps in the 1st half, however, due to the running clock rule once the lead got beyond 35 points early in the 3rd quarter, they only had time for 15 snaps the entire 2nd half. The Terriers offense finally seemed to shake off the rust that was seen last week and hopes to continue that level of play for the remainder of the season.

Overall, it was a very good night and one in which the starters came in from the opening kickoff and dominated. The backups also got much needed time to improve and show that they could make plays as well. This is a huge part of maintaining a winning program for future years, as the younger and more inexperienced players got significant playing time. Mark it on your calendar now to hit the road this coming Friday night and join us as we travel to take on the Spoto Spartans. We covet your support and always appreciate seeing Terrier fans in the stands. We’ll see you on Friday!