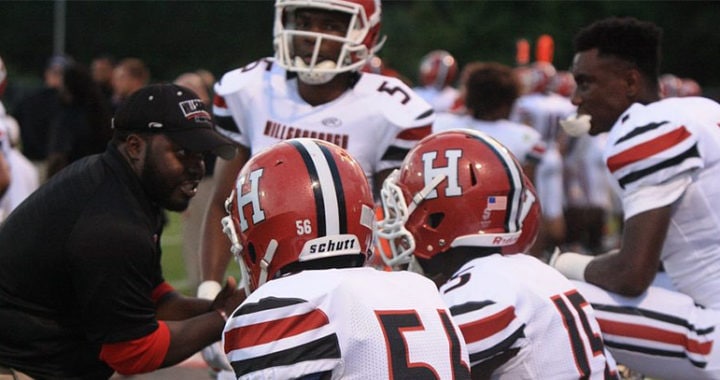 The Terriers went on the road for the first time this season after not having been on the gridiron in two weeks, thanks to hurricane Hermine, in a game against the Cowboys of Gaither High School. Since 2004, the Terriers and Cowboys have faced off 8 times and Hillsborough has not been beaten in any of their meetings during that span. That streak would not be broken on this night.

Typically, many aircraft can be seen from the Cowboys field due to its proximity toward the airport and flight paths of the jets taking off from Tampa International. However, for a few hours on Friday night, the Terriers defense made it a complete “No Fly Zone,” as the duo of S Leon Gatlin and CB Marterrence “AJ” Holloway swiped 4 INT’s out of the air from Gaither QB Gavin Denboer to go along with many pass breakups and excellent coverage by the entire defensive back corps. AJ Holloway, on one of his 3 INT’s, made a spectacular and acrobatic, almost circus-like catch, jumping up and back while reaching with both hands off toward the side of his body and making the catch just before impacting the ground. Overall, the Defense played very well once again and have helped settle the team while the offense looks to find their rhythm.

The offense seemed to still be suffering some effects from the tropical system that recently moved across the state. Having not played in a week, the offense definitely showed some rust. There were a few bright spots as RB Drequan Mccullough and RB Duran Bell, once again this season, found the endzone through the air and on the ground respectively. QB Tyler Thomas completed the pass to Drequan for the TD, and had some exciting plays utilizing both his feet and his arm. Overall, the Offense will need to knock off the rust going forward and take advantage of the turnovers that the Defense has been creating for them and also capitalize on the good field position they have had.

You will not want to miss this next week’s game. Your Terriers are back at home in the Dog Pound at Chelo Huerta Stadium. The “REDOUT” game that was canceled due to the hurricane has been moved to this week. Therefore, we need you there in your Terrier red gear making as much noise as you can while we open up our district schedule with a game against King High School. We’ll see you on Friday.