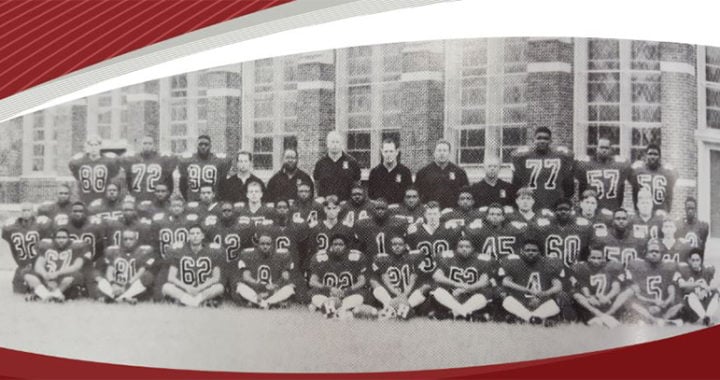 It goes without saying… the talent from the 1996 Hillsborough Football team has often been imitated, but never duplicated. No other team in the Earl Garcia era has achieved 6-A state finalist since 1996. In honor of their accomplishments, we celebrated the 20 year anniversary of this great moment in HHS Football history during the HHS vs King game held on September 16th. Coach Earl Garcia dubbed the event “The Year of the G.O.A.T. (Greatest of All Times).

Many great players have come and gone but none have been able to duplicate the success of the 1996 Terrier team. At the time, no other school had been to a state final since 1971 when Robinson High School lost 29-13 to Fort Pierce Central. The most successful season in the history of Hillsborough High didn’t feature one crushing victory after another. In fact, The Terriers trailed in the second half six times and won by a touchdown or less five times. Despite drawbacks like having as many as 5 players who went both ways and no standout running back, they were the only team to set a county record of 13 wins in one season. They had one Division 1 signee, Andrew Williams, who went on to play for the University of Miami and the San Francisco 49ers. Andrew will also be inducted into the HHS Football Hall of Fame in October 2016. Players Jeremey Earle and Keynondo Hudson also went on to have successful coaching careers. 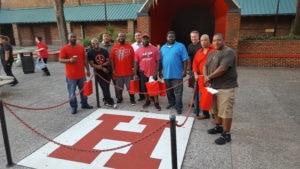 During the reunion the group shared hugs, handshakes and plenty of laughter. Kevin Hammond, Robert Maddox, Errol Hunter and Mike Green huddled together to share comical memories with Coach Vernon Henderson and Coach Earl Garcia who were proud to have also coached their sons Chuck Henderson and Earl Garcia III that season. The group took a brief tour of the school and also visited the hollowed H-Patio noting the many changes that have been made to the school over the years. Jesse McNeil, Aleous Chambers and Kyle Jones enjoyed the tour of the newly renovated football fieldhouse, laughing and stating how “lucky the kids are to have air conditioning”. Many memories poured in of the times when HHS players didn’t have the luxuries of having multiple Under Armor uniforms, new lockers and an in-house weight room. “All we had was the football and the field, that’s what made us victorious. All we had was the game. No cell phones, no social media, no cameras flashing. ” said Casey Robinson.

The G.O.A.T were escorted to the field and recognized by Principal Gary Brady and Athletic Director Mick Boddie during half-time on the 50 yard line. The 20 year anniversary was in loving memory of: Michael Reid, Curtis Blue and Maurice Martin who also played on the 1996 team and were a big part of the teams success.

The question that still remains… Will there ever be a team that can achieve state finalist…. or better yet, WIN a state championship? There are many games to be played in the future, but until then, 1996 is the Year of the GOAT.