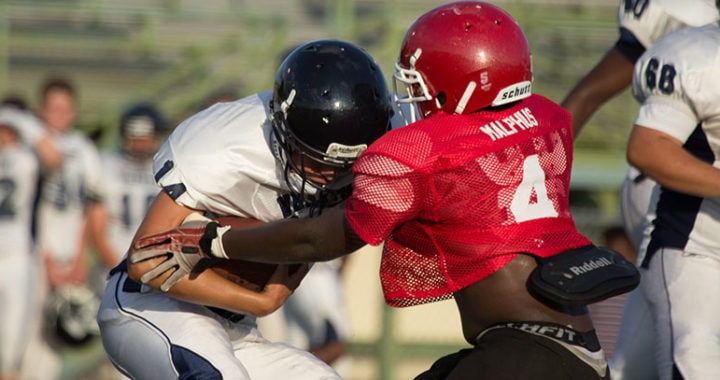 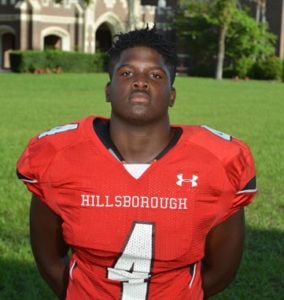 Malphus was recognized as Hillsborough’s Defensive Player of the Week for his efforts versus East Bay in the Terriers’ 41-0 rout in the preseason classic. Malphus was credited with six tackles, three assists, and a QB pressure. His defensive coaches nominated the junior linebacker because of his overall play combined with his outstanding physicality against the Indians. Here now is a few good minutes with the Big Red’s Jahaad Malphus.

Q: First off, congratulations on your reward for the hard work in the classic, but this week it counts for real. BIG game this week versus Durant and they beat you guys last season, but this obviously a different Hillsborough team this season, isn’t it?

JM: “Yes sir, they beat us last year, but we’re prepared for them. The difference from last year to this year—is that this season we have way more speed and senior leadership trying to pull things together and lead. Coach G has really been tough on us trying to make sure we get our acts together and stop playing around. That’s helped us become a better team already.”

Q: This is now your third year on campus as a member of the Terriers’ Football program. Do you have a favorite moment thus far? What’s your favorite part about Hillsborough High School?

JM: “My favorite moment(s) has just been simply when we come together as a team. My favorite part is just the fans, and they love they show us. They make us feel like we’re at home. I really can’t explain it because it’s just powerful.”

Q: What’s your favorite part about playing the linebacker position?

JM: “My favorite part is that I feel like linebackers are the command center for the defense. If us linebackers get everything situated, the whole defense will work as one. If the linebackers are playing around and not doing their job, there’s gonna a lot of people that have to more work than they have to.”

Q: Think back to when you first stepped on to that practice field as a freshman–then fast forward to now. What did you realize that you THOUGHT you knew about playing the position, but really didn’t know anything at all about playing it?

JM: “I thought I knew it all at linebacker until Coach Longfellow started coaching me up and saying all the bad things that I was doing wrong fundamentally. That’s what made me realize I had to get right–that I had to stop all the bad habits I had.

Q: How much more is there to go? You’ve come this far, but you’re probably feeling like you’ve got a very long way to go. Is that a fair assessment?

Q: What are your on-the-field goals for this season?

Q: With that linebacker corps that you have this season, between you, Dre (McCullough) and of course (Armand) Chalk and others, all of you guys are talking about 100 tackles a piece. That’s a lot of tackles and would be record-breaking.

Q: This feels like it’s a season that’s just as much about redemption as it is about anything else, is that fair to say?

JM: “Yeah, we had a terrible season last year, and we’re trying to step it up since last season is not what Hillsborough Football is supposed to be about.”

Q: What’s the hardest part about balancing being a student and an athlete. The most common obstacle is time. Is that your assessment as well?

JM: “School comes first, so it’s not an option to slack off. You barely have time if you want to be the best in the classroom and then you have to take it to the practice field and take it to another level—THEN once you get home, you’ve still got to shower up and study classwork and then film work for this week’s opponent.

Q: Most folks don’t realize that the Friday Night Light’s have barely turned off before you guys are back on a Saturday morning to breakdown film either, do they?