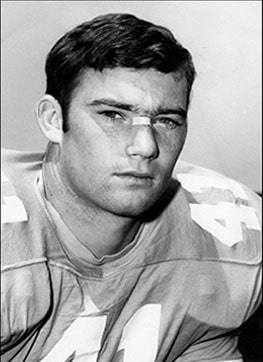 Roger McKinney was the 3 year letterman in Football & Baseball for Hillsborough High School as well as President of Student Council his senior year. In football he was a Running Bach who won honors for All-City, All-Conference and All-State. McKinney ran for over 1, 000 yards senior year, led the team in TD’s and scoring, HHS Record 5 TD’s in one game. He was also the Kicker for extra-points and kicked the game-winning field-goal in a Turkey Day Game which resulted in a 10 – 7 victory over the Plant High School Panthers. McKinney led the Western Conference in scoring and rushing, participated in North and South All-Star Game and was a Mac Farrington Award Winner.

He showed football prowess at an early age before he got to Hillsborough as a member of the undefeated, un-scored upon Memorial Junior High School City Championship football team (6- 0). City champs, City record. Scored TD in all 6 games.

In baseball McKinney was a Member of 1967 State Championship Team in which he threw a game-clinching one-hitter as a junior, State Runner-ups 1968. 2-year All-Conference, All-State. Led Western Conference in hitting with a .460+ avg. senior year. And was subsequently drafted to play professional baseball. He instead took a Football & Baseball Scholarship to University of Tennessee. While at the university he lettered 1 year, was the Freshman leading scorer and a Member of the Tennessee Volunteers Gator Bowl and Sugar Bowl teams.