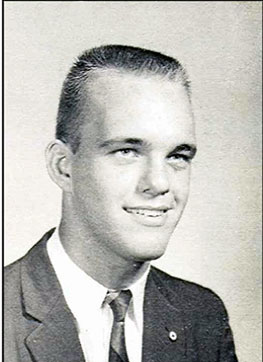 L. E. Hicks was an Offensive and Defensive Tackle for the Hillsborough High School Football Team where he won honors for All City, All Western Conference, All State and scholarship offers to both University of Florida and University of Miami.

L. E. attended the University of Florida on a football scholarship from 1957 – 1962. During the 60’s the University of Florida Gators football team achieved unprecedented success. The Gators had 9 winning season and went to 5 Bowl games. L. E. played the tackle position. Upon graduation, L. E. was drafted by the Philadelphia Eagles. He graduated from Florida with a commission in the U.S. Army as a 2nd Lieutenant. Uncle Sam got priority to the Philadelphia Eagles, as the Vietnam War was raging and the Army needed officers.

Professional: He began working with what is now CSX Railroad. He worked in management as a supervisor. He was with CSX for 32 ½ years. During that time he received many awards, and retired as a Trainmaster at age 56.

He married and raised a family with his wife Ann Peoples for 45 ½ years until his death due to Parkinson’s disease in January 2008. Father of two girls: Lauren and Leslie. Grandfather to 3: Drew, Cail and Lainey. He was active in his church and was a Deacon. He also worked in a prison outreach ministries for many years.