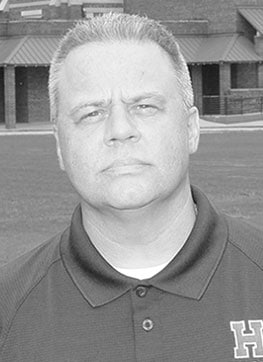 Dean Eychner was the Assistant Head Coach and Defensive Coordinator at Hillsborough High School from 1995 to 2012. Coach Eychner has been an integral part of an overall record of 123 wins and 31 losses while working at HHS for 14 years, has had numerous district titles, playoff appearances, and participated in the 1996 State 6A Football finals.

Professional: He began his career as a volunteer football coach in 1986 after playing both as a youth and in high school. He spent his first nine years coaching youth, junior/senior high, and college football. He joined the HHS football staff in 1995 and has helped Head Coach Earl Garcia make Big Red Football into an annual success. He was also a faculty member at HHS.

He is most proud of the numerous football student-athletes who’ve signed academic and athletic scholarships during his tenure, and the reputation of Hillsborough Football as a program of distinction.